Freestyling in Venice and Greece - How to get around 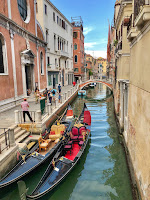 The smell of pizza, the color of gelato stands on every street, the busy water taxi’s and gondolas making their way down canals, could only mean one thing...We’re in Venice! Two years of saving and 2 weeks of quality time and rest were upon us. Our Greek cruise would get its start in Venice, Italy. This trip was somewhat planned in that we knew where we would sleep each night, but a bit free-styled as we did not pre-arrange any tours. For two pretty calculated people, we were looking forward to figuring things out as we went along. Turns out, this strategy would end up being our favorite vacation of all time! We hope you’ll enjoy the tour and learn a few helpful things along the way if a Venice or Greek cruise is on your bucket list.

First things first...as we arrived at the Venice airport, I looked for a local SIM card option for my phone, a much cheaper way to stay connected. My AT&T account has a feature that allows me to pay $10 per day for phone, texts, and data, but the local Vodaphone SIM card was good for all of Europe and gave us 8gb for only $40 euros. We paid the $10 extra because Facebook, WhatsApp, Messenger, and Skype did not count against the 8gb. AT&T is good for Canada and Mexico, but for other parts of the world, I find a local SIM card to always be the best value. Focus on data. For our 2 weeks, 8GB was plenty to surf the web, get emails, post photos on Facebook, and make data calls on WhatsApp & Messenger. 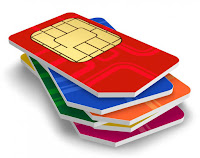 Now for the first adventure...trying to figure out how to get to our hotel in the heart of Venice. Taking a taxi was the obvious choice because there were a ton of them at the airport, but we knew that could be costly so we asked around. For $14 euros, we got on a public bus that took us straight to the main bus station in Venice. It was the number 5 Aerobus. This was a double connected bus with a pivoting center. Sheri and I sat near the pivot point which made juggling our luggage quite a feat for the next 30 minutes. It was well worth the effort as a water taxi would have been $120 EU for a one-way ticket. Knowing what I know now, I would have bought a multi-day public boat and bus combo ticket that included the Aerobus to and from the airport. If you are going to Venice...do this from the start and you will have unlimited travel around Venice at a great value!

So the bus got us most of the way there. Water taxis were taking off everywhere near the bus station when we arrived and were a little intimidating, but we just started asking around for help. We were told to walk across the bridge and down the path, past the train station, and our hotel would be nearby.

So that “bridge” was about a 50-meter bridge that crossed the Grand Canal and had stairs going up and down both sides. It was pretty hot out so carrying a 70lb suitcase up and down a big bridge would definitely be a workout. Of course, porters were there to carry bags for a fee, but I needed a workout and didn’t want to pay so we carried our bags.

As we crested the bridge, we could see Venice was hopping with people! Thanks to Google and a local data SIM card, we walked right to our hotel. I’m confident we never would have chosen this hotel if it wasn’t for Trip Advisor. The Venice Times Hotel was tucked away down a little, narrow alley and was very unassuming...just a quaint little boutique hotel. Walking in we were greeted by a wonderful staff who gave us the lay of the land in a very concise presentation. I was immediately impressed by two things at this hotel...they gave us a FREE android phone to use during our stay with unlimited data and free calls anywhere around the world! Wow! Who does this? The second thing was that the wet bar fridge that was fully stocked, was completely FREE for the first round of snacks. It was water, sodas, and juice, but still, a nice touch to not charge for these. I could tell this hotel was going to work out great! Trip Advisor has never let me down yet.

People ask me all the time if I get jet-lagged from all my travel. When I say “no” people often wonder how that is possible. “Discipline” is the key! After a long flight, our body was telling us to sleep, but discipline was telling me not to listen, as that would usually mean a short nap that would turn into a sleeping marathon! Since it was only about noon, we decided to lay down for a brief nap. Without discipline, we knew this could have started our body clocks off on the wrong foot. Getting up after an hour nap was pure mind-over-matter because we probably could have slept for 4 or 5 hours! 1 hour proved just right, as we woke up refreshed and ready to explore. We also got a regular night's sleep that night.

We had always seen pictures of the Grand Canal, the gondolas, and water taxis. We were not really sure how big Venice actually was. Would we get lost walking? Would we walk for hours and not reach the end of the canal? Fortunately, our hotel staff let us know we could make the walk from end-to-end in about 30 minutes. A piece of cake right? Well, we still had to wind around on busy little streets, which were many times more like tight alleys where we feared we’d get lost. Between some well-placed signs, and following the crowd, we made our way just fine. You really can’t get too lost in Venice. 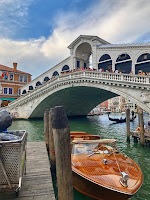 It was a little toasty outside, so after getting back to the hotel, we cooled off, then decided to look for a dinner spot. Another inside scoop from the hotel staff directed us to cross the bridge near the hotel and enter into the local side of Venice on the other side of the canal. We were told we’d find a quieter area with some restaurants and shops that were priced more for locals instead of paying high tourist prices. The suggestion paid off and was a very nice evening away from the crowds. We didn’t really have to walk that far to get there. Just cross the bridge and the vibe totally changed. We found a small little Italian restaurant and ordered some lasagna and pizza. Before long, a busking guitarist set up right near our table and gave us what felt like our own private flamingo guitar concert. He was awesome! For dessert, we found a gelato shop which is pretty easy to do. They are everywhere! Pistachio for me and some Mango sorbet for Sheri, and our night was complete!

There was more food to experience, more sites to see, but we were tapped out on Day 1. We were already planning how we’d mix it up on Day 2. Venice could not contain us. Where would we end up? Stay tuned.
Posted by Darrel Larson at 9:43 PM