Fighting Selfishness On Our 35th Anniversary Vacation, and a Day in Milan, Italy. 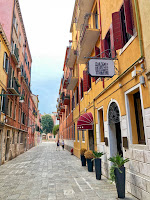 Have you ever stayed in a hotel with a bad bed? How about a bad pillow? For me the pillow is often the biggest factor in sleeping well. The Venice Times Hotel probably had the best bed/pillow combo for a great night’s sleep of any hotel I’ve ever been in. And just like that, it was 5am and I was ready to wake up and explore. That made one of us!

Two valuable life lessons are that of being flexible, and considerate of others. Forcing a 5am wake up on Sheri would have been selfish so I laid there until 6am until she was ready to wake up. Forcing 5am would have also fallen into the category of “How’s that working out for you?” Haha.

Sheri and I are similar in so many ways, but in our morning routine, we are opposites. I like breakfast and coffee right away, she likes to wait a while for breakfast. Although my morning routine wanted to head straight down to the restaurant for breakfast, eating breakfast by myself felt selfish. This  was after all, our 35th anniversary celebration.  I decided to use the hot water kettle in the room and make some coffee and wait for Sheri so we could eat breakfast together. I think one of the things married couples wrestle most with is selfishness. When we spend our time “taking” rather than “giving” we really set ourselves up for conflict and failure. I also find that this happens mostly in the little things. String a few “little things” together, and you’ll end up with big things. Again, this falls into the “how’s that working out for you” category. I haven’t met anyone who likes to live in the crazy cycle of arguing and fighting. I’d suggest a good first step is to get over yourself and quit being selfish. Let that become a habit, and you’ll have a lot more peace.

And now for my Italian word of the week...”Prego”...which means “you are welcome.”

The words “breakfast buffet” can have a lot of meanings when staying in a hotel. This hotel was had a really nice breakfast with an assortment of scrambled eggs, bacon, meats, fruit, breads, and pastries. Now were were ready for our adventure.

I wasn’t sure how much I would like staying a block away from the train station, but it ended up being awesome. For one, you could never hear a train. For another, we were one block away from connecting to all of Europe! We opted for a 2 hour train ride to Milan. That seemed like a good option for a full day trip to see a historical city we’d heard about all our lives. 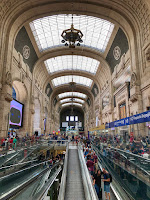 Although I was a little nervous about buying train tickets and actually getting to Milan, it was actually a breeze, and finding our train was easy too. All the train routes were well displayed. We had the option of buying a first class or second class ticket. That triggered a bad memory. In the Solomon Islands, first and second class boat tickets only had a $5 difference in price, but a BIG difference in quality. First class was on the top deck with a half working air conditioner. Second class was in the hot, cargo dungeon. In Italy, the only difference was between a cloth seat, or a leather seat for $30 EU more. We bought the second class seat, saved the money, and that was just fine.

The train ride was scenic and very peaceful, with views of beautiful farm land, historic buildings, and gorgeous water fronts. Once we arrived in Milan, we scoped out one of our favorite, low cost things to do in big cities, the Hop on Hop off bus tour. There were 3 routes in Milan. 2 of them would allow us to see all of the big tourist sites and be done in time to catch the train back to Venice. 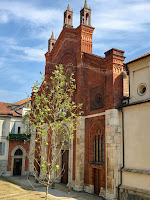 My favorite site was driving past the little church where Leonardo de Vinci painted “The Last Supper.” I was filled with awe being so close to a place where such a big historical event occurred. The city was filled with great architecture as most of Europe is, and offered lots of photo ops. One of the strangest things about this bus trip was that on both lines, Sheri had a headset that had English in one ear, and Italian in the other. We thought it was weird the first time, but when it happened on the second bus, it was kind of freaky. Who knows, that could be the secret to learning languages faster.

After the bus tour, we walked down some seemingly empty streets which is always a little unnerving. In the daylight I have a lot more courage and sure enough, a few streets later, and we were at a busy intersection filled with shops and restaurants. We made our way into a little deli and had an amazing green and fruit salad! Somehow we resisted the force of the bread that was everywhere. Bread is both of our weaknesses!

Once we started walking, we were a little heated up, but found a little water vending machine on the street corner. The only problem was that you needed some sort of prepaid card to use it. Fortunately there was a really nice man who noticed us struggling like the tourists we were, and he offered to use his card to fill our bottles. He was from Argentina and spoke a little English. Between his English and my Spanish, we enjoyed a nice conversation.

We made it back to the train station with time to spare and had a nice ride back to Venice. We were both bobbing our heads on the trip as we were in need of a power nap. I set my alarm just in case I fell into a deep sleep and wound up somewhere in Europe that I did not want to visit.  For those of you who have traveled to Europe, you know how easy it is to get around on the train. I would highly recommend it from our Rookie point of view. 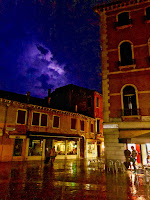 After dinner on the rainy streets of Venice, we were tapped out. The next day we’d board our cruise to Greece so we both wanted this sleep to go by fast. We had more amazing places to visit! Stay tuned and we’ll take you there.
Posted by Darrel Larson at 3:19 AM