I left San Diego at 10pm on Thursday, stopped over for a 6-hour layover in Miami, and made it all the way to Port-au-Prince, Haiti. My flight was FULL of relief workers from the US. There were lots of clean water organizations represented, most of them were drilling wells in Haiti. As we were flying, I found myself wondering what Haiti was really going to be like? How much had Haiti recovered from the Earthquake of 2010 and the Hurricane of 2016? From the view at the airport, it looks like they have made quite a bit of progress. The airport was small and simple, but newer and orderly. 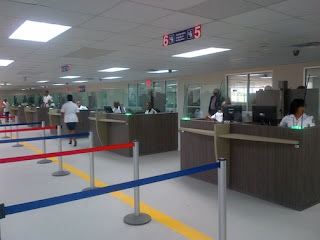 The first thing I had to do when I walked inside the airport was to stop at a booth and pay a $10 tourist visa fee. That was the same drill as other Latin American countries I’ve been to. From there we made our way to the passport stamp area. In many countries, I do not look forward to this line, but I have to say, for being one of the poorest countries on earth, Haiti’s passport and customs clearance was the best I’ve ever seen. They had lots of lines open and they sent us right through. I was faced with the question, “How could this be?” It definitely was not what I expected, but it was great! My first lesson of the week was that a 3rd world country could teach a thing or two to a 1st world country. That was a humbling thought.

When I got through customs, I walked into a lobby area. As I looked outside, I saw that the airport was pretty modern, but there was a sea of people waiting to pick people up. It reminded me a lot of flying into Liberia. There must have been 15 guys who offered to carry my bags and get me a taxi. Everybody was hustling for business. I had to wait 1 hour for the rest our group to arrive so I just kept turning down taxi drivers. I did manage to buy a Sim card for my phone while I was waiting. I got 3GB of data that in most countries would cost me about $30 to $40. Here in Haiti…$10. First thing I did was call my wife. I’m missing her already. 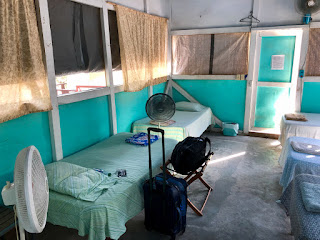 Our team finally arrived and we headed to the guest house where we are staying tonight. It is clean but very basic. There was a clean bathroom, not by my standards at home, but hygienically clean. There was a shower with cold water, but at least we had a shower. My room has 7 twin beds in it with 3 fans. The room is a basic wood frame with some plywood walls, about 3 feet of screen for windows, and a shed style roof with plywood and corrugated metal.
There is certainly nothing fancy about this room, but I’m sure it is like a mansion compared to the way many people live in Haiti. I will soon discover if that assumption is true. 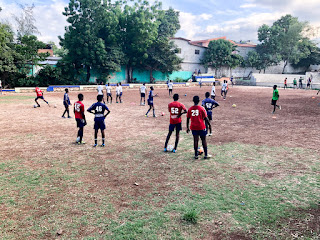 Right before dinner, there was a youth soccer practice on the field next door. The kids were really good! I hate to break it to the NFL, MLB, and NBA fans but It doesn’t matter where I go, soccer is the World’s sport. Maybe Fiji would argue that for them it is Rugby.

We missed lunch today so by the time dinner was ready, I was really hungry. As my old Louisiana buddy Michael Henry would say, “I could eat the horns off a Billy goat!” Our dinner was really good. There was some sort of meat, mac & cheese, greens, potatoes, carrots, and homemade bread. It really hit the spot!

After dinner, I was pretty much a sweaty, sticky mess so I got cleaned up and now I am sitting in front of one of the bedroom fans trying to keep cool.

Tomorrow we’ll drive about 4 hours to our home base for the rest of the week. We’ll be visiting villages that recently had Cholera outbreaks. I’m already wondering what that will be like? What will I see? What will I feel? What will I learn? Stay tuned!
Posted by Darrel Larson at 6:41 PM