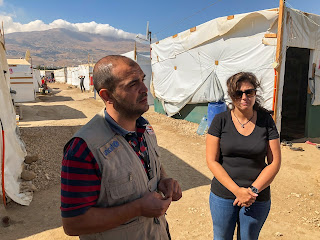 After we visited our first Syrian refugee camp in Lebanon, we saw 100 families who were surviving on so little. Thanks to World Vision, these families had clean water and clean toilets which helped them stay healthy, but beyond that, there was little else. The tents these families lived in were side-by-side and provided some protection from the elements with a little privacy, but not much more than that. I was trying to soak it all in, but the more I did, the more it hurt. When I found out they did not have blankets for the upcoming winter, I was filled with a range of emotions. I think the biggest emotion I felt was anger. I was angry that these families had to live like this. I was angry at the evil that would drive them from their homeland. And I was angry that I was driving away with enough money in my savings account to buy at least some blankets for them. 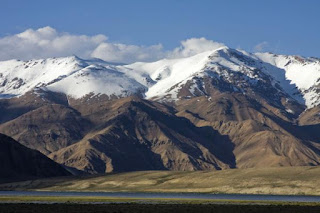 As I felt the weight of the rich young ruler story in the Bible, we started brainstorming how we could get these families some blankets. Without them how would these families survive the upcoming winter? They were in the basin of a valley at the foot what would soon be the snow-capped Syrian mountains. As I write this, we are working on a blanket solution, but I must say, it's not an easy solution. Even if we gave all the money for these blankets, we would not be guaranteed that these families would receive them. As the government goes about the overwhelming task of dispensing resources to these camps, you can imagine what the waiting list is like for 1.5 million unexpected visitors. I have to say one thing...hats off to Lebanon for their kindness to these families! They are really trying! 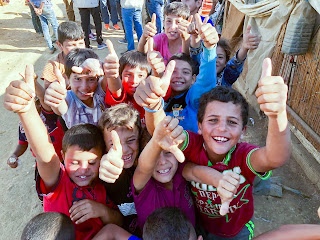 With our eyes enlightened to the reality of this crisis, we loaded up the van and headed to our second refugee camp. When we arrived, we were greeted by more kids with big smiles! This is one of my favorite universal human experiences. We were greeted by some of the adult men in the camp who lead us on a brief tour then took us into one of their homes. 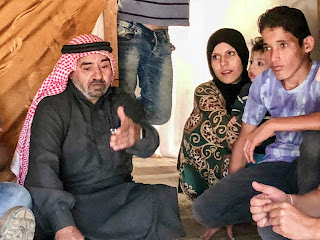 This tent had a few pillows which the family offered for us to sit on. As the family came in from the other room, they brought in their kids, one of them who was pretty severely handicapped. They shared how hard this situation was on their family. Their journey to Lebanon was tragic, fast, and scary. They left everything they had in Syria in order to save their lives from war and terror. They told us that what they really wanted most was to go back home to Syria, but could not go until it was safe.

The family shared what their resource challenges were. When they arrived, families were given a $180 stipend provided by the UN plus a meager food allowance. The $180 stipend was only temporary and this whole camp had recently lost theirs. All that was left was a very small amount of money for food. Jobs were hard to come by since there was so much competition, and way more people than available jobs. Buying medicine and diapers for this family's handicapped child was pretty much impossible. This was truly a tragic situation. What was more tragic was the fact that this was just one family, one out of the 1.5 million refugees living in Lebanon.

Another shocker that was revealed to us was that none of these children were attending school. As a matter of fact, that is the plight of most Syrian children living in Lebanon. In my next post, I'll share a bright story of hope as we visited a World Vision school in Lebanon that is full of some beautiful Syrian children! 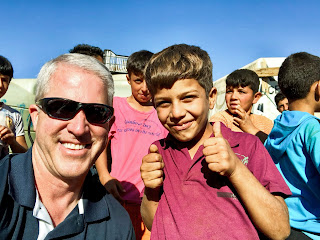 If you can't tell, this trip really messed with me! Maybe as this story unfolds it's starting to mess with you too. That's OK. My hope is that we'll be compelled to develop a life of generosity that really changes the world!
Posted by Darrel Larson at 10:11 PM